Malcom McLean, also known as “the father of containerization”, developed the metal shipping container in 1956, which revolutionized the transport of goods worldwide. Little did he know at the time, his invention would also go on to transform modern architecture.

It is possible that containers were sometimes used for other purposes than shipping, but it’s not clearly evident until the late 80s. On November 23, 1987, Phillip C. Clark filed for a United States patent described as a “Method for converting one or more steel shipping containers into a habitable building at a building site and the product thereof.” This patent, number 4854094, was granted on August 8, 1989 and the information and diagrams it contained were used as the basis for many shipping container architectural concepts.

The use of shipping containers as a building material has been growing in popularity over the past several years.  They are appealing materials due to their fundamental strength and rather low expense.  Container usage is also viewed as more eco-friendly than the traditional building style.  Another big reason many architects and builders are choosing to use containers for their projects is the widespread availability of them.  Containers have a very long life span and are being stockpiled at ports around the world, so it’s an ideal opportunity for builders to take advantage of. 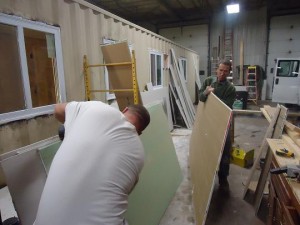 A container being turned into a home at MODS

Although shipping container architecture has been around for years, it seems like it’s been more prevalent in the past few years. People worldwide have been using containers to build homes, offices, stores, advertisements, malls, hotels, and much more. 2014 showed us some great creations and it will be interesting to see what architects will create in 2015.

If you are interested in learning more about shipping container uses or if you are ready to begin creating your container dream, contact us today.

2 thoughts on “The History of Shipping Container Architecture”