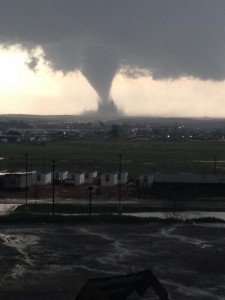 The twister touched down at around 7:50 p.m. at a camp about 5 miles south of Watford City, which is in the west of the state and about 30 miles southeast of Williston, the city at the heart of the state’s oil boom.

McKenzie County Emergency Management Director Jerry Samuelson said crews sifted through a large amount of debris at the camp, but that he was confident that nobody was missing. He said there were a lot more trailers at the camp just a few days ago, so the situation could have been a lot worse had it happened earlier.

“Obviously, we’re very fortunate there are no deaths, to our knowledge.”

He said the injured were in their trailers when the tornado struck. Karen Holte, a volunteer at an American Red Cross shelter set up at Watford City’s civic center, said the tornado descended on the camp so quickly that nobody had time to take shelter.

(watch the video below to see the drama unfold)


The critically injured person was taken to Trinity Health hospital in Minot for treatment, Samuelson said. The others who were hurt were treated at McKenzie County Memorial Hospital in Watford City.

One of the injured workers, Tony Beyda, was among nine people who were spending the night at the shelter. He suffered a head wound and cuts on his arm.

“I saw it come at me,” Beyda told The Associated Press, referring to whatever it was that hit him. He pulled back the bandage on his forehead to show the stapled wound.

“It peeled it back pretty good,” he said, referring to the skin on his head.

Beyda thought his cat was killed when his home was destroyed, but was surprised to learn from Watford City’s fire chief, Oscar Knudtson, that the cat and someone else’s dog were found alive.

William Bunkel, who works for a trucking company, said he was in Watford City with some co-workers when the tornado warning came. They had just moved their vehicles inside because of large hail when they spotted the funnel cloud.

“We saw it form, come out of the sky, hit the ground and go back up into the clouds,” he said.

Bunkel, 38, took photos of the twister and estimated that it remained on the ground for nearly a minute. He said he couldn’t see any debris.

“It was a little bit too far away. We just saw the clouds and the rotation,” he said.

Besides large hail and the tornado, the storm also produced heavy rain and high winds, said Adam Jones, meteorologist with the National Weather Service. The agency will survey the site Tuesday to follow-up on reports of three funnel clouds on the ground, he said.

“We heard there were three touchdowns. But we haven’t heard if that’s three separate tornadoes or the same tornado touching down three different times,” Jones said.

The oil boom has fueled a population boom for the area, bringing in tens of thousands of people looking for work. Many live in hastily-assembled trailer parks or man camps, which contain pre-fabricated structures that can resemble military barracks. Some companies rent blocks of hotel rooms for employees to live in, and some workers sleep in their cars or even tents.

Housing developments are constantly popping up in big areas of town that didn’t exist on maps a couple of years ago. But they are still not enough to keep pace with demand and oil money has pushed rents to among the highest in the nation: A simple one bedroom apartment in Williston can easily cost $2,000 per month in rent. Even a spot to park a trailer can cost over $800 per month.

The video demonstrates the need for a secure shelter for workers in tornado prone areas.