The Central Philippines braces for the worst super typhoon of the season packing sustained winds of 174 mph, gusting to over 200 mph. Moving across heavily populated areas, Super Typhoon Haiyan (know as Yolanda in the Philippines) will affect millions of people including those located in areas hit by the recent 7.1 magnitude earthquake that killed 222, injured 1,000 and displaced 350,000 people. 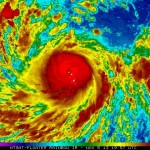 While the recently displaced residents struggle with makeshift shelters, the super typhoon will bring along high winds, flash floods and landslides to the already desperate conditions.

It’s storms like this that prompted the development of MODS and that MODS housing is designed to best withstand. Set in place before the storm hits, MODS could save thousands of lives and provide comfortable shelter after the storm passes and the cleanup efforts begin.

Contact MODS International Today for information on preparing for the worst.